In the Work, conscience, our means of discernment, is connected to emotional center and corresponds with one’s level of being in any given moment.

Acquired conscience is a vast collection of beliefs, judgments, biases and cultural associations, which, as is implied in the name, is not inherent in us, but is formed in each of us in early life. Everyone has an acquired conscience, though it is different in each of us, according to our life experience, gender, race, religion, place of origin and economic and cultural background, and many other factors.

Real Conscience, which the Work describes as “feeling all together,” is an inner compass or Truth-sensor which is the same in all people and eternal because it is from divine center. It is also known as buried conscience because it is obscured by inherited and acquired patterns. With the purification of the emotional center, Real Conscience, which is connected with Real I, emerges.

“The reason why you do things is quite different when you act from acquired conscience from when you act from Real Conscience. When you do a thing from Real Conscience, from consciousness of yourself and what you are like, its action is to develop essence. You make, as it were, essence understand why certain things are necessary. But if you act from acquired conscience for the sake of internal considering as to how you stand with other people in order to make a better position for yourself, then it will not develop essence because the neutralizing force is quite different. You will then do a thing for the sake of some form of merit and not from insight into the good of what you are doing for its own sake. You may be meritorious, an excellent person, and yet inwardly you may be nothing but a sham or practically so. What we learn of good from the acquired side of us by education must be shifted from that outer basis and become a genuine sincere thing which we wish to live, not merely imitate, which we wish to be and not merely pretend to be. In all this lies a great deal of very sincere self-observation …”

The Work term consciousness points to the potential of humans, through recognition of their place in the universe and through the capacity for self-awareness, to awaken to a more complete experience of being human – an existence of expanded agency, choice, will and conscious love.

At its core, the word consciousness suggests knowing that we know. Bernadette Roberts refers to this as a function of the mind’s reflexive capacity. Consciousness is also clearly related to whatever it means to be created in the image of God, or manifested from the Absolute. While there are many different definitions and experiences of the mystery of human consciousness, in the Work, consciousness may be defined as the state or atmosphere by which we experience reality, including oneself. Notice that this state or atmosphere may include intellectual knowing, but also can transcend intellectual knowing. If we employ self-observation, we will soon recognize that we have a shifting kaleidoscope of I’s that produce different states in oneself: one moment we are in one state and, in another moment, another state based upon the dominance of the I’s at the fore of our being. 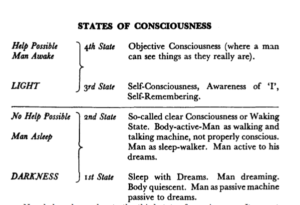 “Consciousness: A fully attentive state in which, by literal definition, one is aware of everything simultaneously; but practically, of everything that one knows of a particular subject. Although we have only rare flashes of it, we are never entirely without it, and if used, it will increase in energy, because it is the subjective aspect of Being and thus of relative intensity. In man, the first degree of consciousness is sleep, when only automatic functions require energy. The second, waking-consciousness, is only marginally distinguishable from sleep. The third degree, self-consciousness, in which one is objectively aware of oneself in moments of action, feeling or thought, is everyone’s right. The fourth state, objective consciousness, gives objective truth about everything. Energy of consciousness is always trying to make connections, thus it produces desires. … Self-remembering is the state experienced when the energy of consciousness connects one to oneself.”

“The two higher states of consciousness are connected with the functioning of the two higher centers in man.”